The Verb Hotel near Fenway Park, recently named among the 10 best hotels in Boston by Travel + Leisure magazine, will debut Backstage at The Verb Hotel in September, a fleet of 10 custom-crafted trailers that make guests feel like A-listers.

The trailers were created by Boston-based development group Samuels & Associates, in partnership with Spot On Ventures, LLC.

“We wanted to expand on the nostalgia of travel and the music industry while offering a modern interpretation — a first-of-its-kind, urban trailer park,” Steve Samuels, founder and chairman of Samuels & Associates, said in a statement.
“This new fleet of custom-crafted trailers is fully modernized for today’s traveler, with all the amenities that any A-lister would expect ‘backstage,'” Samuels said.

The trailers are outfitted with heating and cooling systems and equipped with patios and luxury private baths, complete with rainfall showers. They showcase artwork and rare music ephemera. 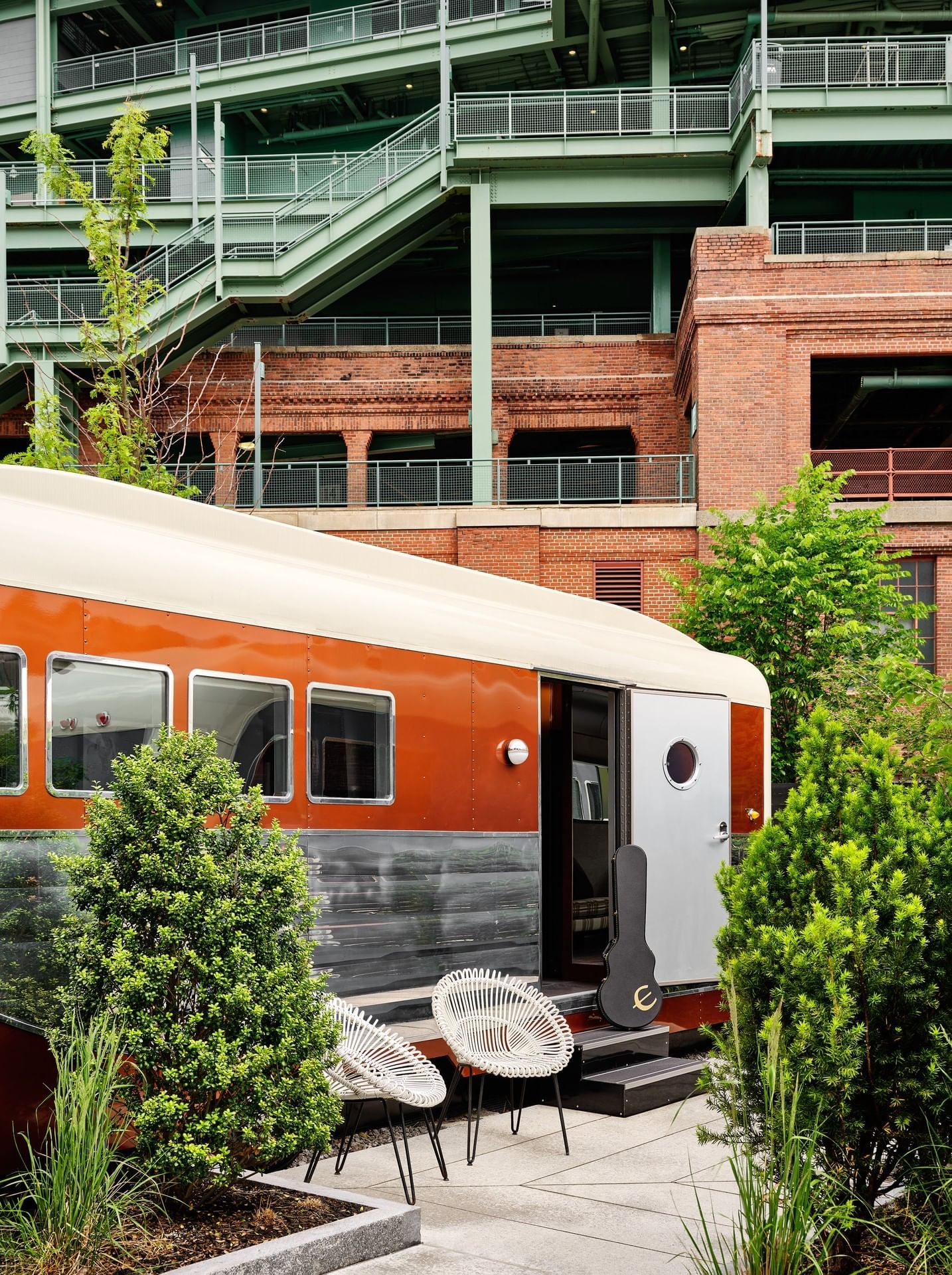 A Backstage at The Verb Hotel trailer. Read McKendree

“We were thrilled to work with Planeta Design Group to outfit each trailer with the custom amenities afforded to the VIP rockstar — from a king bed, to a personalized minibar, Nespresso machine, Bose sound bar, gallery lighting and a 43’ 4K TV,” Robin Brown, founder and principal of Spot on Ventures, said in a statement. “Hardware, stitching, and chrome exterior details that shine like the handlebars of a chopper evoke life on the road. No detail was overlooked in order to offer guests a personalized, all-access VIP experience from the moment they are escorted Backstage.”

Backstage guests also have access to the hotel’s amenities, from its outdoor heated swimming pool to its extensive vinyl library to Hojoko, the hotel’s onsite restaurant. The living room inside a Backstage at The Verb Hotel trailer. Read McKendree “In the summer, guests can relax outside while listening to musicians rehearsing and performing in Fenway Park, or just be part of the vibrant Fenway neighborhood in the privacy of this urban retreat,” according to a press release. 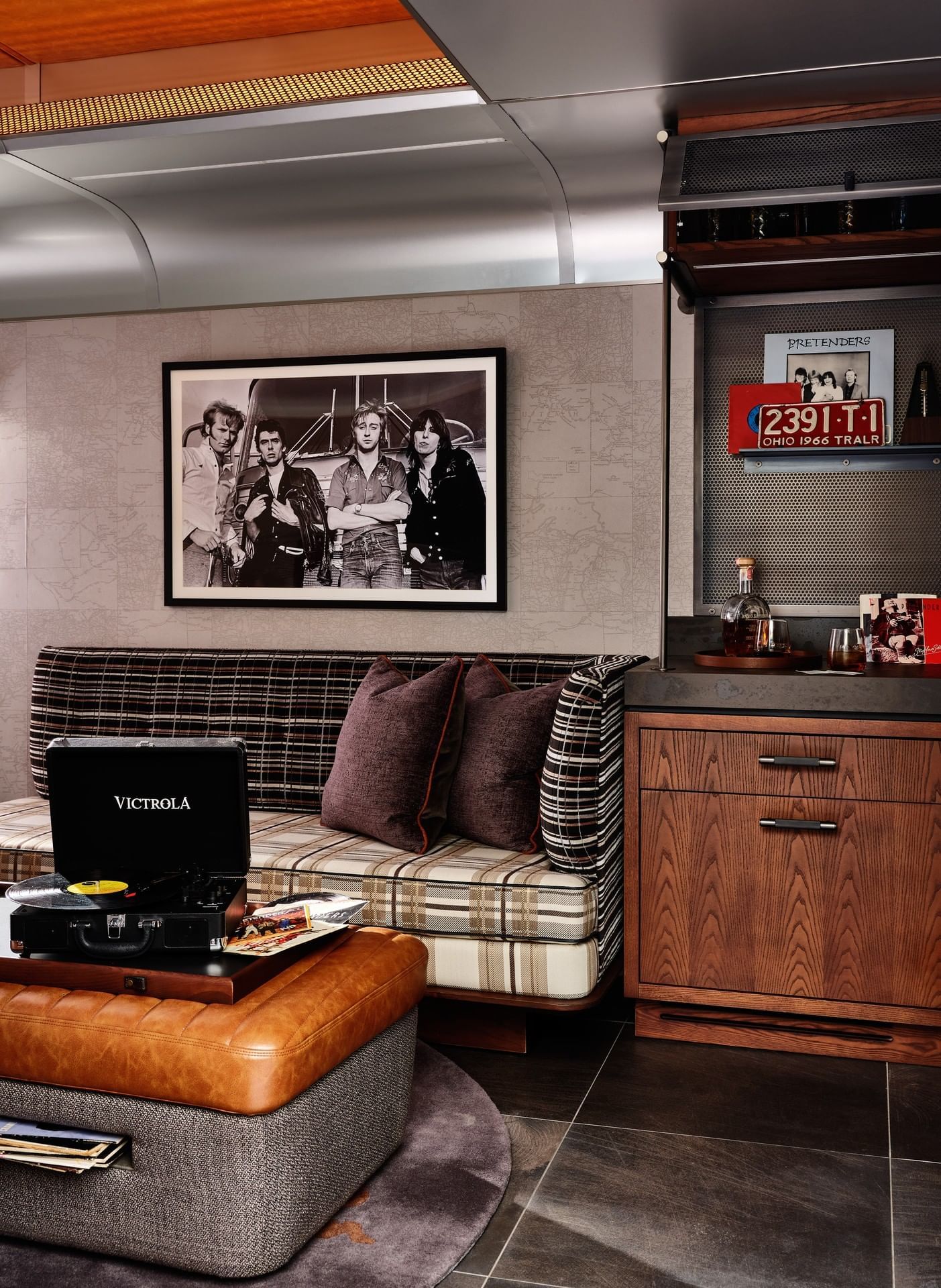 The living room inside a Backstage at The Verb Hotel trailer. Read McKendree

“The connection between vehicular travel and motels is inherent to The Verb Hotel; the original two-story, mid-century motor lodge already had a rich history of housing touring musicians before we gave the property new life in 2015,” Samuels said. “In seeking to expand, we took our cue from our popular Flxible Clipper bus — a landmark at the hotel, while drawing inspiration from the legacy of touring musicians and their fans traveling the open road to see them. This new fleet of custom-crafted trailers is fully modernized for today’s traveler, with all the amenities that any A-lister would expect ‘backstage’.”